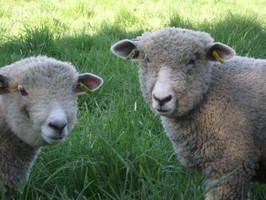 Ryelands are a traditional British sheep breed. They are well known for producing excellent
quality lamb and great tasting meat. Ryeland lamb is much sought after by rare-breed butchers, top chefs, hotels and restaurants. Hand spinners and weavers also seek out Ryeland wool for it texture and quality. Unlike some breeds of sheep Ryelands are docile and easy to look after, which makes them ideal for smallholders or people new to keeping sheep. Ryeland and Coloured Ryelands do well on a diet of good grass, without the need for additional feed. This means they are particularly suitable for organic lamb production.

Ryeland sheep are amongst the oldest of the established British sheep breeds. Although the exact origins of the Ryelands are lost in the mists of time it is believed that they were derived from the Spanish Merino. The breed was developed in the area surrounding Ross-on-Wye and was highly prized for its fleece. The wool clip was of exceptional quality, and this was partly attributed to the succulence of the grazing – a reflection of the excellent pastoral conditions of the area.  Mediaeval records show that Dore Abbey ran a flock of 3,000 of these sheep, and the monks were responsible for weighing and conveying the wool crop to Hereford for collection prior to shipment overseas. It was mostly sent to Flanders,  highly important in the wool trade at this time, and also to Italy, fetching the highest price in Europe in the 13th-14th centuries. Ryeland wool became the measure against which the quality of other wools was assessed. During the 16th Century the breed  increased in popularity, possibly helped by the supposed fact that Queen Elizabeth I was a strong supporter of Ryeland wool. Apparently a pair of stockings, given to her as a gift, pleased her so much that she swore that she would thereafter only wear clothing made from Ryeland wool. The breed widened its geographical spread, moving up towards Leominster which was the main wool market in the area. The wool became so highly valued that it was termed “Lemster Ore”. It is also believed that the Lord Chancellor’s seat in the House of Lords, the “Wool Sack”, was originally stuffed with Ryeland fleeces. It has since been  re-stuffed with wool from around the Commonwealth as gesture of unity and
friendship.

In addition to their fine fleeces, Ryelands have always been highly regarded for their quality carcasses. The number of breeds specifically developed for meat production increased
dramatically in the latter half of the 18th Century thanks to the pioneering work of Robert Bakewell, and the emergence of the Leicester sheep. Later the creation of the Suffolk added to the competition. In the second half of the 19C the Ryeland was still dominant in its native territory, but was probably beginning to experience some pressure from these other breeds. Ryelands became popular for crossing with Dorset, Lincoln, Cotswold, and Leicester sheep as part of the huge interest in breed improvements brought about by the legacy of Bakewell.  Ryelands were also significant in the development of the Poll Dorset, the likely source of the polled gene. However, the opening years of the twentieth century saw little interest in pure bred Ryelands from commercial farmers and the formation of a new breed society was partly a response to this situation. The Ryeland Flock Book Society was founded by eight breeders in 1903, a time that saw the establishment of a considerable number of our traditional sheep breed societies. The main aim was to encourage the breeding of Ryelands both in the UK and overseas, and to ensure that the purity of the breed was maintained. Also, a Flock Book was to be published annually, and sheep would be registered in it with details of their pedigrees being recorded. Both of these aims were achieved very quickly – Volume 1 of the flock book comprised of 14 flocks, ranging in size from 14 to 280 ewes, and listed 135 registered rams.

Ryelands prospered during the 1920s, with some 80 registered flocks. Ryeland sheep took a hefty 12 prizes at the 1922 Smithfield show!  Growth in the breeding population continued (despite a small downturn during the Great Depression) into the 1940s. During this period,
Ryelands were exported all over the globe, particularly to Australia and New Zealand, where affiliate breed societies were founded. The first Ryelands made it to New Zealand in 1903, and Australia in 1919. However, the end of the Second World War saw the beginning of a significant decline in Ryeland numbers. In 1952 there were only 40 Ryeland flocks remaining. By 1974, only 980 registered breeding ewes remained, a situation which caused it to be listed as rare by the then newly formed Rare Breeds Survival Trust. The combined efforts of the RBST, the Ryeland Flock Book Society and a band of dedicated breeders have turned around the breed’s fortunes.

Today it is numerically healthy and has been reclassified by the RBST as a minority breed. The number of flocks has risen but flock sizes are much smaller than previously, bearing out the fact that most Ryelands are now kept as “hobby” sheep, rather than as a commercial breed. The Ryeland Flock Book Society has in the region of 500 members made up of Ryeland and Coloured Ryeland breeders. Ryeland sheep sometimes produce coloured lambs as the result of the expression of recessive colour genes. These Coloured Ryelands have no gene for whiteness and so, when bred together, always produce coloured lambs. Fleece colours vary from palest silver through many shades of grey to black. Occasionally fawn or dark brown may occur and the body colour may be uniform or spotted or patched.

Where to find us:

Ryeside Ryelands are based in North Yorkshire